Previous to the building of the Presbyterian church  near Grantville on  Lower River Road ,  a travelling Presbyterian minister would direct worship services in a designated family home within  each community where all agreed to meet. In 1898, that church building was moved to its current location in Cleveland , then called McLeod's Landing, and in 1925 was renamed the Cleveland United Church. The cemetery remains in Grantville. (see Cleveland United Church Chronology in drop-down menu)

One of those early ministers was Reverend Dougald M’kichan, who was sent out from Scotland  in 1829 to minister to the colony by the Glasgow Colonial Society. Unfortunately the ship on which he was travelling  was wrecked off Arichat, but there was no loss of life.  The survivors landed in Arichat  where Rev. M’kichan held a preaching service for all the local Protestants.  He so impressed all who heard him preaching that when he took his designated charge in the Merigomish Congregation at Barneys River, Pictou County, where he ministered from 1829 to 1832, the Presbyterians along Inhabitants River kept writing him to come minister to them. He finally heeded their requests and moved to Canso in 1832 and ministered to the Presbyterians all along the Inhabitants River until 1840, holding services in designated homes.
The Church of Scotland held strictly to its rules for living, and members of the church had to be periodically examined by their respective minister to be judged as being worthy members of the faith. If an individual was found worthy, he or she would be freely issued a handmade communion token by the minister; said token was expected to be returned to the minister in exchange for receiving communion on Communion Sunday in his or her community. (See the attached photocopied of page “NS 208” from the Presbyterian History of Church Artefacts.)
It is thought by some that Rev. Dougald M`kichan was a direct ancestor of the MacKichan family who lived and farmed along the Riverside Road at Cleveland.
All of the local congregations who built church buildings in the area probably owe thanks to Rev. Dougald M`kichan and other like him who pioneered for their faith. 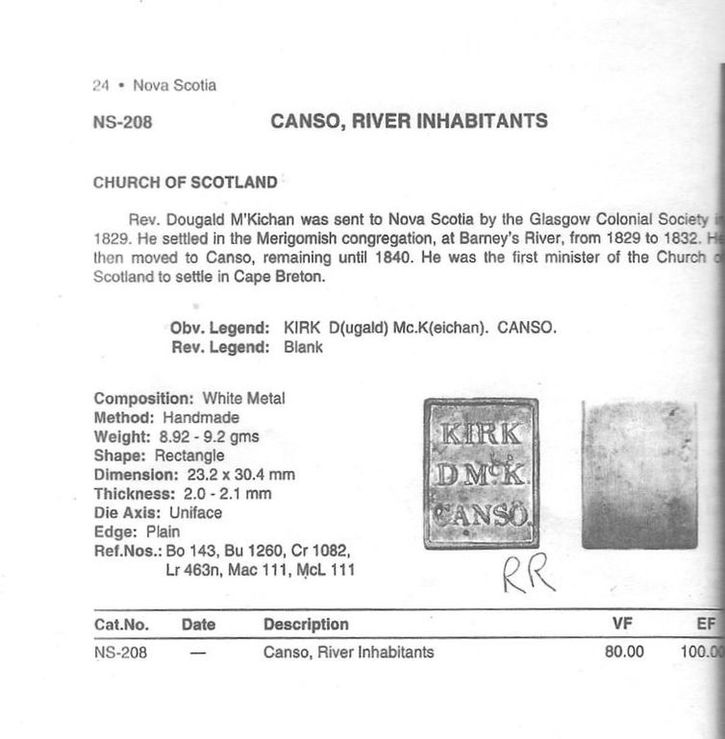 The above photocopy and historical information was provided to Lester Morgan at the Cleveland Heritage Church Museum by a visitor, Presbyterian Minister from Ontario, Rev. Angus Sutherland, who went out of his way to do so, Sunday, July 7, 2013, 12:30 to 1:50 p.m., after crossing the Canso Causeway on his way to holding an outdoor Communion Service at Whycocomagh on that date at 3:00 p.m.
​