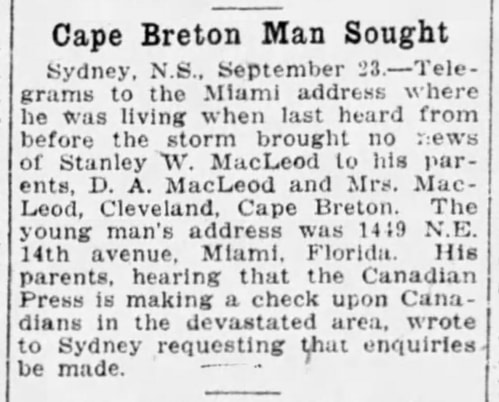 The owner of the MacLeod store in Cleveland, D.A. MacLeod and his wife feared their sun was missing after a hurricane in Florida. This news item was printed in The Montreal Gazette on 24 September 1926. 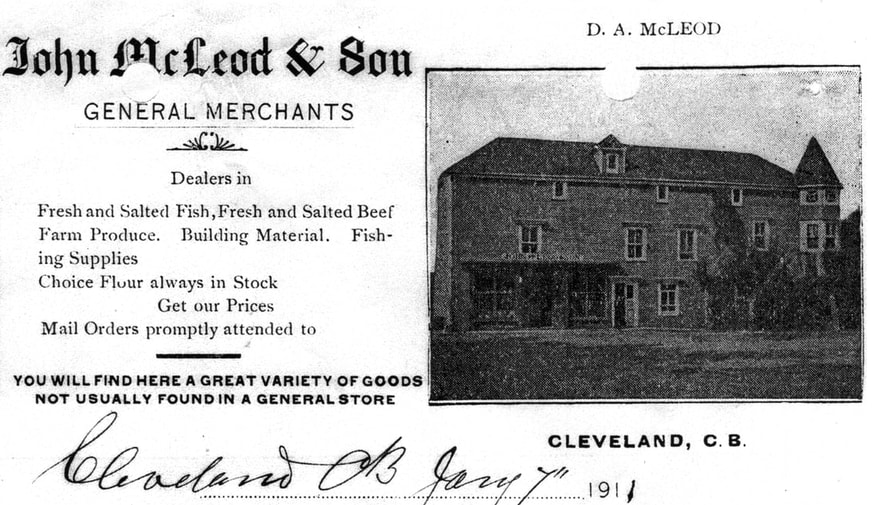 The MacLeod family legacy as merchants and residents of Cleveland  can be seen above  in this 1911 illustrated invoice , a rare image of an imposing four-story structure now missing from the Cleveland landscape. Also this news item about their son feared missing in a Florida storm.
* * * * * * * * * *
​
Until the early 1900’s, the communities around the Inhabitants River prospered.  Many of the Proctors, some of the Malcolms and the Walkers owned clipper ships and sailed around the word in trade.  The last two families ran very prosperous retail business and shipping businesses within their communities.  All the other people of the communities worked in various venues: for ship owners or merchants, fished, farmed and lumbered for a living; or worked in the Richmond Coal Mine in Lower River Inhabitants, which operated until burnt out by a forest fire in 1936; or were involved in all of the first four industries, even supplying pit props for the mine.  A coal mine by the name of Tide Water Coal Mine also operated for as short number of years on two separate occasions from 1928 in lower Whiteside, but was flooded out by underground water on each occasion.
The Morgans, Doyles and the Dunphys ran water driven saw mills and the Morgans and Doyles also jointly operated a water driven grist mill.  A Rory Dunphy, before moving away, even ran a saw mill off a huge raft chained in the Inhabitants River. Forges also flourished in the area under both the Fergusons and the Morgans, and many of the men from most of the families were skilled carpenters who built not only in their communities, but also in Port Hawkesbury, Port Hastings and around Ile Madame.

Even after sailing ships were no longer considered as commercially viable, most of the people earned good livings in the other industries mentioned.   Only during the depression of the 1930’s did a few of the families need social assistance.

the average education levels within the communities were fairly high and there was a good work ethic due in part to the traditional Celtic interest in education, a trait shared with the loyalists, This was a significant factor in the 1960s when the big industries of pulp and paper (Stora Forst Industries),  the Gulf oil refinery and heavywater were established at Point Tupper, Richmond County.  There were very few men and women of the communities who did not find employment. The vast majority became employed in those industries or in the related retail industries.  As a result, most of the residents have a comfortable living with a good number now retired on substantial pensions.